The digitization and privatization of human experience from the global to the intimate has become so pronounced in capitalist societies that it is now difficult and perhaps unnecessary to disentangle the production of media from that of place. Indeed, the reciprocal production of geography and technology entailed in globalization has led to a re-theorization of the urban form over the past two decades. Hybrid constructions of the “Informational City” (see Castells 1992), “Cybercity” (see Boyer 1992 and Graham 2004), “Networked City” (see Mitchell 2003), and more recently the “Real-Time City” (see Hollands 2008 and Kitchin 2014) suggest a growing interest and inquiry into the political ecology of a supposedly “smart” urbanism.

In his inaugural address to the Media Ecology Association at Fordham University, Neil Postman (2000) described a medium as:

a technology within which a culture grows; that is to say, it gives form to a culture’s politics, social organization, and habitual ways of thinking.

With this understanding of media in mind, a look at development in advanced capitalist societies—both psychosocial and geoeconomic—reveals an urban form increasingly entangled with and within an ever-expanding ecology of proprietary media. Corporations like Google, Facebook, and IBM now provide platforms upon which our daily lives are carried out. Like place, this media gives form to human experience and as such provides a valuable object of analysis for understanding our societies and ourselves. Together, the mutual shaping of place and media can be understood as a point of social material intervention for reorienting our environment and, with it, ourselves. This reading list offers a critical and interdisciplinary introduction to some of the promises and perils of the mutual shaping of people, place, and media in contemporary cities. 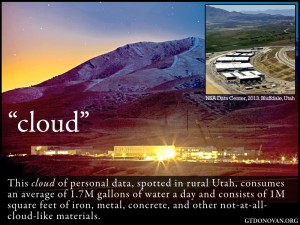 In selecting these 30 readings I hope to connect scholarship that challenges ahistorical and flattening discourses of new media, cloud computing, and big data. The mythology created by such discourses—of mighty data generated thru new social interactions, and circulated in immaterial cloud-like form—obscures contemporary modes of production. It conjures an image of a society rapidly approaching real-time knowledge and flexible production through unexploited labor and reduced carbon emissions. This mythology, of course, conveniently elides the historical geographies of injustice and inequality keeping pace in contemporary configurations of people, place, and media (see Daniels 2009, Donovan & Katz 2009, Fuchs 2009, and Huws 2009). Collectively, these readings help demystify and critically analyze informational capitalism while also pointing toward democratic methods for producing more meaningful and just cities.

Gregory T. Donovan is an Assistant Professor of Communication and Media Studies at Fordham University whose research focuses on the mutual shaping of people, place, and media. He received his Ph.D. in Environmental Psychology with a certification in Interactive Technology and Pedagogy from the CUNY Graduate Center, is a founder of the OpenCUNY Academic Medium, a researcher at the Public Science Project, and co-editor of The Journal of Interactive Technology and Pedagogy’s special issue on Media and Methods for Opening Education. gtdonovan.org | @gdonovan

This site uses Akismet to reduce spam. Learn how your comment data is processed.

Welcome to the site for The People, Place, and Space Reader! The reader brings together the writings of scholars from a variety of fields to make sense of the ways we shape and inhabit our world, including both classic writings and contemporary research. Here you will find open access versions of the section introductions, links to readings, and topical further recommended reading lists from subject experts.

About the PPS Reader

Click here to order with a 20% off discount flyer: